Word Division Puzzles
What is WDP?
...and how to solve one.

WDP (Word Division Puzzles) for Android is a simple app that generates difficult and random WDP that you can solve while sharpening your algebra and logic skills. This version is not meant for novices, though novices are certainly welcome to try. Future versions may include a leveling path to go from beginner to expert, but this version is not that. I primarily made it for myself because I love the logical processes involved in solving them. For me, the fun is not in getting the answer correct, but the journey leading up to it. If you do not like to think, don't bother with this app. It offers no cool animations or thrills. However, if you like to use your mind and the struggle to find a solution, you just may enjoy the HELL out of it.

The best way to describe WDP is to just show you. On the right (or below the Example WDP heading if on a phone) is an example of what WDP look like. In the middle of the android screenshot, you'll notice what looks like a long division problem, but with letters instead of numbers. The goal of this puzzle is to solve each letter for its value 0-9.

How do I Solve a WDP?

The WDP on the right is actually one of the more difficult ones to solve. I didn't intend it that way, it just so happened to be what was on my phone when I needed a screenshot for this article. Therefore, I thought it might be interesting to see if anyone out there wants to give it a try. However, I will try to point you in the right direction by offering the first few clues to acclimate you to the type of logic needed to solve a WDP.

The rest of the problem uses similar, though sometimes more in-depth logic. Often times you won't know until later if a letter is borrowing ten from the previous letter, or the letter behind it is borrowing from it, or both. I find myself sometimes writing equations like (10 or 9 or -1) + R = K + N   since I do not know if R borrowed, was borrowed from, or both. One can usually narrow it down. If not, sometimes one has to make a logical leap and calculate all three possibilities to their end to discover which one works.

You Solved it, Now What?

Once you solved each letter for its value, plug them in at the bottom of the app. For example, under the number 0, tap the box to input the corresponding letter O, and do the same for each of the other letter-number combinations. Then hit the SUBMIT SOLUTION button. With any luck, or some awesome logic, you will be congratulated by the program.

As mentioned before, I wrote this primarily for myself. However, if I find that the app is appreciated, I will add more features. I hope you all have as much fun solving these as I do! Good luck! and awesome Logic! 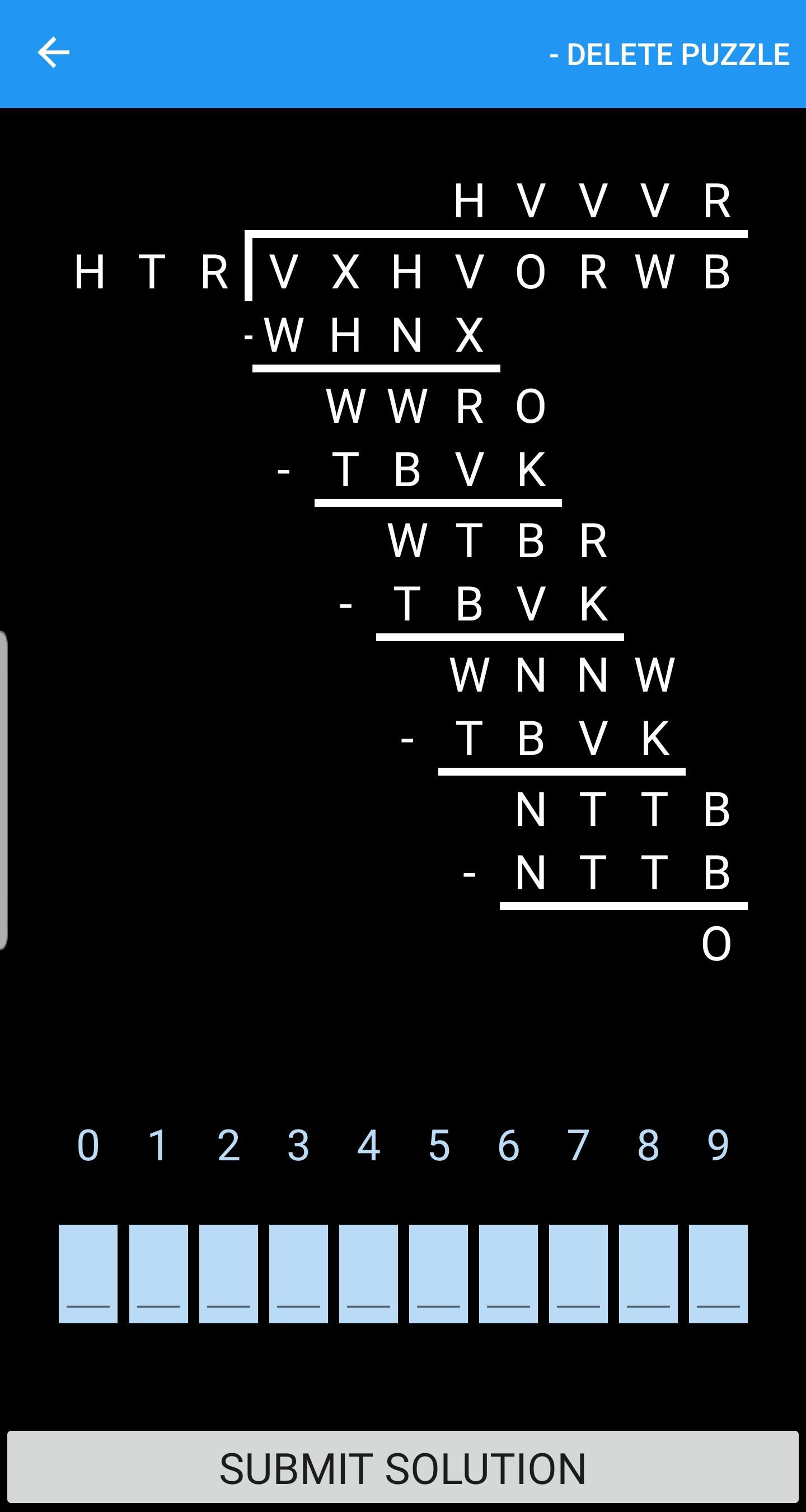 Solved the Above Puzzle?

Send me an email at lander@hypermodern.org with the answer and Ill tell you if you got it right.